Port in Porto, Sushi in Sakaiminato

Yet again I’ve let time get away from me and have left it far to long between these blog posts. I can’t give a complete summary of what has happened in the time since I was training in Sydney in March but I’ll do my best to summarize it location by location. 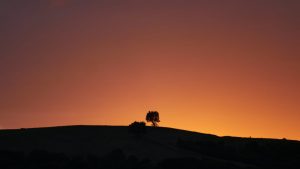 Sunrise view from our house in Gulf Harbour 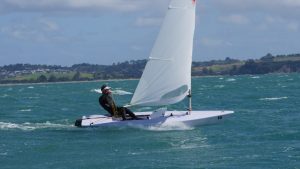 Auckland, New Zealand – After several weeks of training in Sydney we had a change of scenery coming up to keep things interesting. I had been to Auckland before but not since 2015 and was really excited to go back. It’s a great city and I was keen to see the kiwi boys who we hadn’t sailed against since December. We were sailing up on Gulf Harbor, about an hour north of Auckland and we had rented a massive team house for the week up there but not before I had played a few rounds of golf with Greg at some of his local courses. The hours on the water were long and it was bloody tough training but I left New Zealand battled hardened and ready to race. 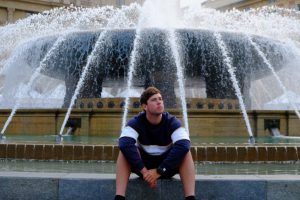 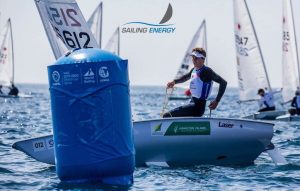 Genoa, Italy – I had never been to Genoa before and neither had most of the worlds sailors I think but this was the new location for the World Cup instead of Hyeres so we all had to get used to this new venue. I flew from Perth with Richo just a few days after I had got home from Auckland and was on the water in my new Laser exactly a week after my last day on the water in Auckland. The venue was known to be notoriously light which was great for me because that was exactly what I wanted to work on. We had a strong 120 boat Laser fleet racing and I was keen to see where I was at. I started the regatta with a 3rd place then wobbled up and down a bit as the week went on. A few unfortunate things didn’t go my way including a race win that got scratched because the other fleet didn’t complete their race but I got what I wanted out of Genoa and left feeling better than I arrived which was the main thing. 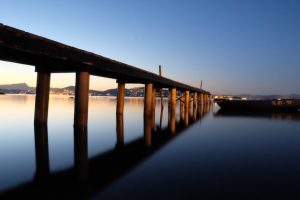 Red, blue and yellow dots all in a row

Hyeres, France – This was my 7th consecutive year racing in Hyeres, a venue that has continuously challenged my racing. I don’t think I had ever posted a top 20 result in Hyeres to date but I came into the event feeling confident and prepared. In stark contrast to Genoa we had too much wind for part of the training leading into the regatta and spent most of the lead into the event sailing in 15 knots plus. The 70 strong fleet started the regatta in some light winds and though and again I started another regatta with a 3rd place. Day three I had one of my best performances to date in classic 15 knot onshore conditions with 1,1,2 which was awesome. I continued that form onto the first day of finals with a 1,6 to move me to second overall. I had a tougher last day of finals racing with a 4,14, 17 but was still holding onto 3rd place going into the medal race. Unfortunately, things didn’t quite pan out my way in the medal race and I painstakingly watch a silver medal turn into a 4th place in a tight medal race. I took some great lessons away from this event though and was keen to use them in the last and biggest event of this trip, the European Championships. 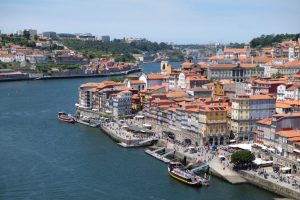 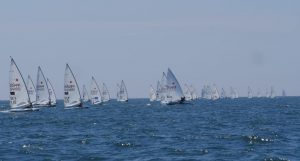 Crossing the fleet from the right

Porto, Portugal – I had never been to Portugal before but I had heard a lot about it and was keen to explore. The city of Porto was vibrant and busy which made it a fun place to visit. Good coffee, great pastries and beautiful architecture were just some of the highlights. The venue also provided some world class sailing with mostly sunny weather and a variety of conditions. The most challenging factor here was the massive Atlantic tides that ripped up and down the coast. The European Champs is second only to the worlds in significance this year so all the who’s who of the Laser world was here to put on a show with a maxed out 165 entries. The event started in very light conditions, not unlike Genoa, and I believe my time there was paying off as I won the first race and backed it up with a 10th in conditions I’m not known to excel in. The next day was even better in lovely seabreeze conditions and I pulled out another 1st and a 3rd to be the overnight leader on the second day of the regatta. The last day of qualifying was light and lumpy but I kept my cool and had a 7th and 10th to round out my qualifying and put me in 4th going into finals racing. Finals didn’t quite go the way I had planned though. I started it with a BFD which compromised the rest of the series and made my starts really hard unfortunately. Even when the conditions where some of my favorite I couldn’t piece together the first beats and I was stuck trying to make up way too much ground to have great scores. My best race of finals was my easiest race with and 8th place to finish the regatta 13th overall. Not how I wanted to cap of my European season but I was happy with how I had sailed; it just didn’t turn out this time. 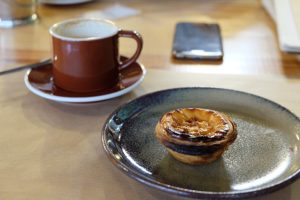 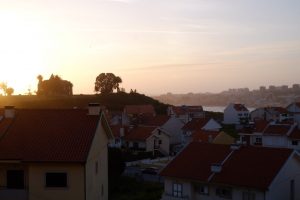 View from our apartment in Porto 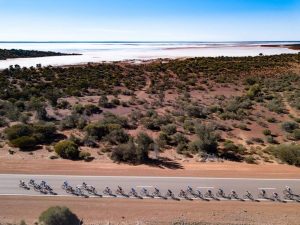 Western Australia – Once I got back home, I had a quick few days in Perth before I drove out to Kalgoorlie to seem my friends Tooley and Karis and meet their new baby Lachy. That wasn’t the only reason I was there though, I was there to do the Goldfields Cyclassic again, a two-day handicap race I had competed in two years ago. The weather was amazing and as always, the riding was tough but fun. I met some new people and caught up with some old friends which was great. I then hit the road again and had a few relaxing days in Esperance before I was in the air again bound for Sydney. 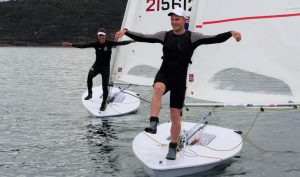 How we wait for wind in training camp mode

Sydney – The next two weeks were dedicated to preparing for the World Championships in Japan. The turn around from the European Championships was really fast but everyone was in the same boat and this wasn’t the time to be taking it easy. Unlucky for me I caught a nasty virus for the second week of training which meant I really didn’t get a lot of benefit out of training for that second week in Sydney. Luckily, I had shaken the majority of the bug by the time I got on the plan to Japan. 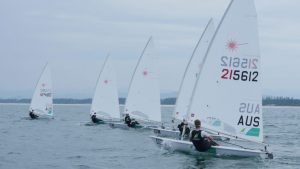 First day on the water in Sakaiminato

Sakaiminato, Japan – Now I’m here at the venue of the biggest regatta of the season, the 2019 Laser World Championships. I’ve completed four good days on the water and I’m finalizing my preparation for the event. Let’s just see what I can do this time, I’m sure it will be challenging and interesting either way it goes.