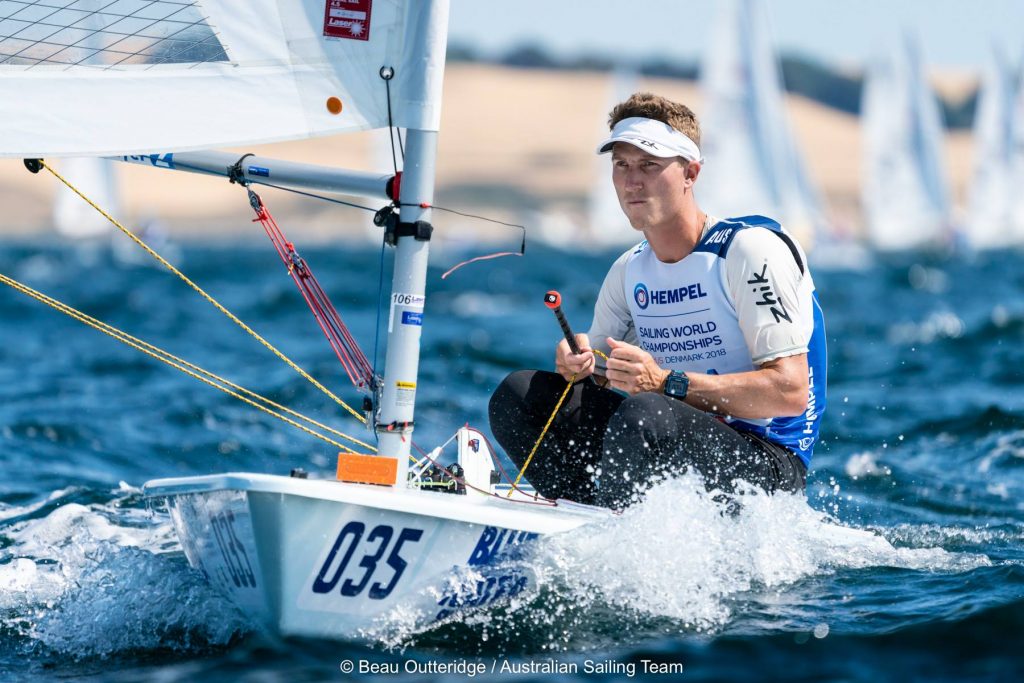 If I had to put 2018 into one word, I’d say growth. I don’t think any one of my 10 seasons as a Laser sailor has changed me as much as last year did. 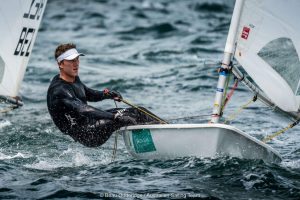 I had a great summer series in my Laser (Sail Melbourne – 4th, Sail Sydney – 4th, Laser Nationals – 4th) then diversified for a while. I competed at the Finn National Championships (5th), the Jess Match Cup (1st), the Warren Jones Regatta (3rd) and the Viper World Championships (2nd). This was a great way to finish up the Australian Summer and left me feeling really confident about the European season.

Sailing is a humbling game though, you get too far ahead of yourself and it will slap you right back into place. The first three major events of the year didn’t go to plan and though I did improve as the trip went on it was not the way I had pictured it being. The Princess Sofia Regatta in Palma was a real shock to the system finishing in silver fleet for only the third time in my career and the first time since 2014. The World Cup in Hyeres wasn’t much better placing 40th. The final regatta of this trip was the European Championships in La Rochelle. It’s a special city for me because my first big break and first overseas trip happened there 7 years ago at the U21 World Championships so I was excited to be back. The event was a step in the right direction placing 18th. Needless to say, there was a lot to think about on my flight back home. How was I ever going to reach my main goal of the year (top 10 at the World Championships) in just a few months?

I needed a reset. I went home for some reflection before heading back to Sydney for a three-week training camp. It was cold, dark and raining nearly 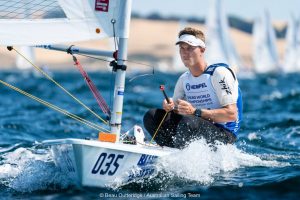 every day with light, shifty winds. It was some of the hardest (and most beneficial) training I’ve ever done. Before long I was back on an Airbus to Europe to begin an international training camp in Aarhus ahead of the World Championships. Things were difficult and I still had doubts about my form and whether I was on the right track. I was running out of time! After two weeks in Aarhus some of the Aussie team got away from the hype and went to my favorite place, Lake Garda, for a fitness camp and some downtime from sailing. The time in Italy was great for me and by the time I’d returned to Aarhus I felt refreshed and ready for the final push to the worlds. Three days before the event started, I had a pivotal day of training where my speed clicked into another gear and I was at the head of the fleet consistently. Now the confidence was there. Now I was ready.

I’ll never forget the 2018 World Championships. I got to experience the full colour of emotions racing can give you and for that I’m grateful. I started the regatta better than I expected and kept that ball rolling all the way to the lay day. After 6 races I was in 2nd place with two race wins in the bag and a string of top ten places. I couldn’t believe it!

Unfortunately, I didn’t manage to keep that momentum through the lay day and into finals. Things kind of unraveled and I couldn’t stop that momentum either. Going into the last day of the regatta I was so close. All I needed was a top 20 to finish in the top ten but I couldn’t hold on. It was the toughest regatta finish of my career.

My next event was the World Cup Japan on the Olympic waters of Enoshima. I was a little worried abo 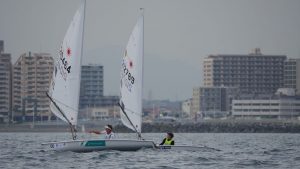 ut this event because a month had passed since the worlds and I hadn’t sailed or trained at all. To top it off the conditions became very light and tricky which was the exact same conditions I failed to sail well in at the end of the worlds. I started the event ok with a mission in mind to not make the same mistakes I had made just weeks before. As the regatta wore on, I got more and more comfortable moving up the leader board to be 5th going into the last two races. Again, I didn’t quite capitalize on the opportunity and slipped back to 11th, just one point out of the medal race. Sailing is a funny game though, the sailor who won the Worlds in Aarhus finished behind me here

This season is the season of the Olympic trials and hopefully my time to step into the sunshine and get some good results. I know now I can compete with the best of the best and have as much of a chance to win as anyone. I’m excited to see what the year ahead brings and I can’t wait to share that journey with you. Finally, I can’t say it enough, a massive thank you to the Ron Tough Yachting Foundation for all that they do for the sport of sailing in WA. You’ve made it possible for the boy from Esperance to chase his dreams and continue to give that opportunity to others. The WA sailing community wouldn’t be the same with out you.

See you on the water,
Swifto aka Luke Elliott