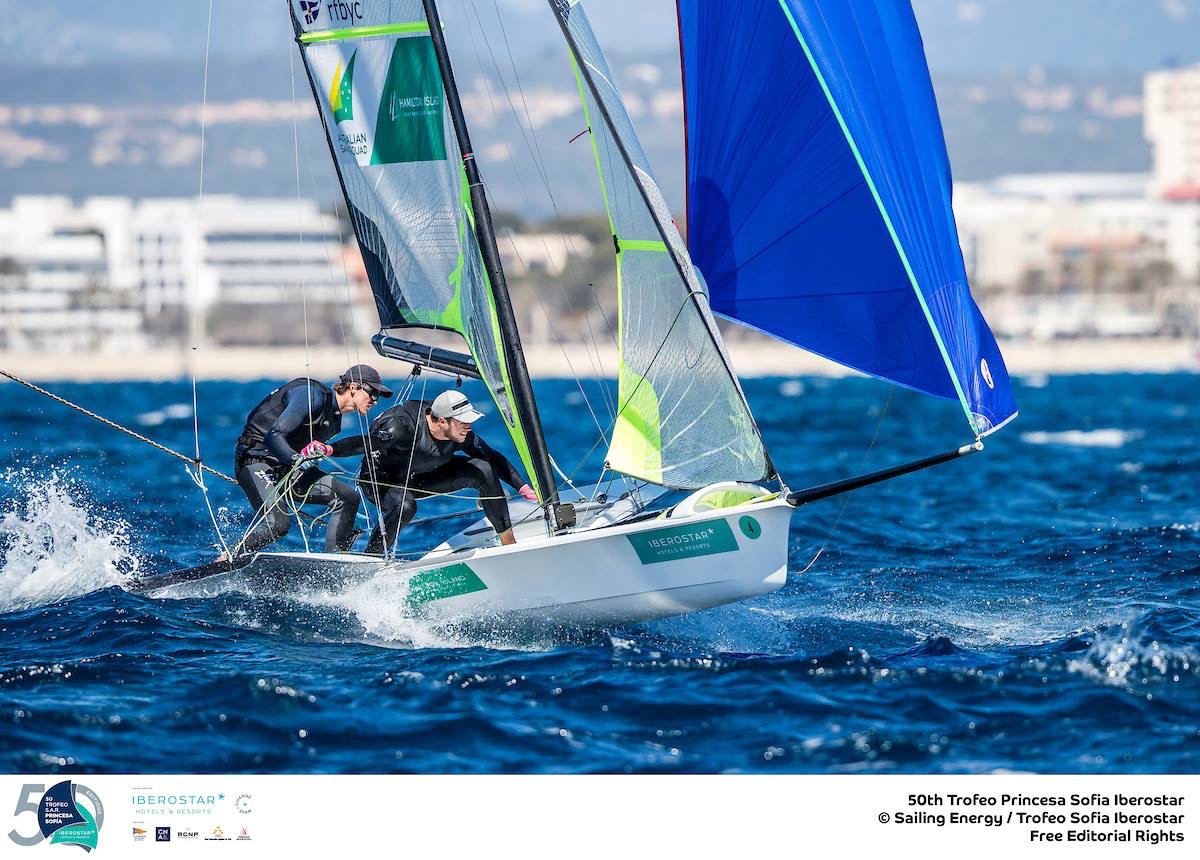 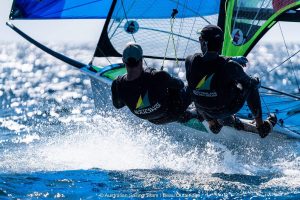 The Princess Sofia regatta hosted by Club Nautico Arenal in Palma de Mallorca, Spain was the opening event of the European Olympic season, boasting a record 49er fleet of 108 teams. Travelling to Palma has always been a highlight each year as we’re greeted with some glamour 49er racing conditions yet uncomfortably cold water and air temperatures for the Aussies which definitely provides its challenges!

Being less than 18 months out from the Olympic Games in Tokyo, the entire fleet have been training hard in an attempt to qualify their nation and solidify their spot in the most prestigious amateur sporting competition in sailing.

The 49er class was spread across three fleets for the opening two days of qualifying racing which after 6 races was to decide the 25-boat gold fleet to go forward for the remainder of the regatta. Dave and I were able to keep our qualifying scores relatively consistent inside the top 10 with a couple of mid-teen places and were able to qualify for the Gold fleet in 15th place. The next two days were probably the toughest racing physically and mentally that I’ve competed in to date, with all of the current best 49er sailors including the current Olympic champions Pete Burling and Blair Tuke (NZL) and the recently-crowned World Champions, Sime and Mihovil Fantela (CRO), however a large number of top teams weren’t able to qualify for the gold fleet. We were having fairly decent starts, however weren’t able to piece together a complete race and were stuck racing around the rear end of the gold fleet.

We had a very tough finals series during the Princess Sofia regatta and were unable to continue our form from the beginning of the regatta and wrapped up the week in 23rd place overall. We were happy with our progress since the beginning of the year, however the week of racing highlighted some key areas that we needed to work on prior to the next regatta, the Sailing World Cup in Genoa, Italy.

With a few days off from the boat park, we got the Aussie sailing and cycling squad together and travelled to the mountains in the northeast of the island to ride up and down the hills. A few days of this allowed us to regain some fitness towards the next few weeks of sailing. 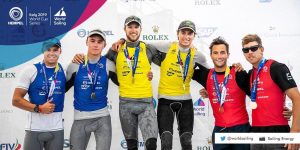 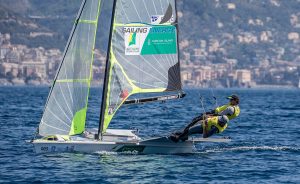 The Sailing World Cup was another important milestone event for Dave and I as this again was well represented by a lot of the top 49er teams. We were expecting Genoa to provide some pretty light conditions, however the first few days of training we were greeted with some great strong breezes. This training was used to adjust our equipment, setup and skills based on the debrief from Palma.

With the long-range forecast looking super light, we decided to save our legs in preparation for the endless number of squats on the trapese. The opening day of racing actually greeted us with moderate winds coming straight off the mountains which provided an extremely high volatile racecourse in which anything could happen, including 70 degree shifts at times! We managed two top 10 races to put us in good stead going forward into the rest of the week.

With two qualifying fleets in the 49er, both race committees had to be quite careful to not get ahead of each other in the number of races they completed each day as this would disrupt the schedule of races for later in the week. However, after waiting on shore for the entirety of day 2, the breeze was so absent on the third day that only one qualifying fleet was able to complete a race.

Day 4 came around quickly and the opening day of gold fleet racing was pretty tough, with a larger than normal gold fleet size (33) and again some light winds were presented. We opened the day with two pretty average scores, before regrouping and adjusting our setup, strategy and mental approach to allow us to come off the start line in reasonable position and take the win in a nail-biter of a finish. The final race that day was also a keeper for us, and somehow, we managed to gain the overall lead going into the medal race the following day.

The medal race was going to be tricky and unpredictable in the variable conditions and that’s exactly what occurred. We played a conservative start and unfortunately were rolled and forced to tack to the right-hand side, and at this point, 10th/10 in the race. An opportunity opened up for us to protect our closest competitor and we sailed through the middle of the course and headed back to the left-hand side. With our superior speed and VMG moding upwind in these light winds, we managed to round the top mark in 3rd position. From here on in, it was just about controlling the boats around us, and not letting those close to us on points get too far out of sight. After the second lap, we crossed the finish line in 4th place to secure the overall win, our first international regatta win as a team, topping some incredible sailors. Such a satisfying feeling to know that after only 6 months of sailing together all the hard work has paid off. 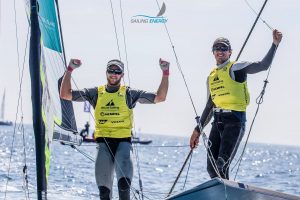 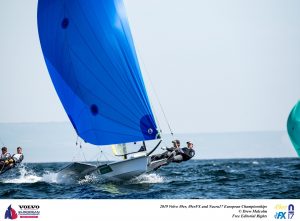 After a successful week in Genoa and some time off away from the boats, it was important to not get complacent leading into the 49er Europeans. A slightly different format for this year’s regatta meant that up to 21 races would be completed over a whopping 7-day event. Contrary to Genoa, the forecast was looking fresh, with a rather big swell for the first few days of the event. After a solid 6th place in the three-day practice regatta a week prior, we were feeling confident to go and all rested up for a marathon of an event.

The opening three days brought us strong onshore winds and waves which proved challenging for us as we battled through the fleet with some unfortunate and slightly disappointing results. We weren’t able to climb high enough up the leaderboard to qualify for the top 25 gold fleet. From this point on it was going to be about trying to learn about how to sail the boat faster in the challenging conditions and learn enough so that next time we would be able to turn it into a strength of ours.

After battling it out in the silver fleet for the remaining four days we finished off in 37th place with times of brilliance although just not able to sail fast enough within the fleet. It was a seriously long week of racing; however, we learnt a lot about ourselves, our equipment and also about our competitors. Although we weren’t particularly happy with our overall result, we can feel positive with what we have learnt about our package as a team and our potential performance for the next 18 months towards the Olympic Games and the key areas in which we need to work on and develop.

We would like to say a massive thank you to the Ron Tough Yachting Foundation for their continued support for our 49er campaign towards winning a Gold medal at the Tokyo 2020 Olympic Games which is slowly creeping up on us. We now look forward to having some time off before getting back into the training and travelling to Tokyo 2020 Olympic venue for the opening series of the World Cup in August.